[A creation of the African Centre for Cities & Chimurenga] 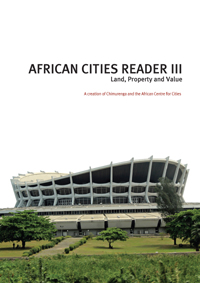 The third installment of the Reader explores the unholy trinity of land, property and value - the life force of cities everywhere. In an era of late modernity marked by a speculative compulsion that takes on a spectral character as it instigates adventures of city imagineering, deal-making and symbolic reinvestment, the material effects are often displacement, violence, daylight robbery and yet another round of elite seduction. The incessant (re)making of the African city is a game that leaves few untouched or unmoved and literally prepares the ground for the inhabitation of another 400 million urban dwellers over the next two decades.

In this issue António Andrade Tomás picks through the post-independence architectural ruins of Luanda and reveals the vice and violence that permeate the act of securing land and home in a city greased with the 'devil's excrement'; Andile Mngxitama challenges the historical and contemporary rhetoric that positions land theft in South Africa in the realm of material dispossessions and asks us to plumb deeper to discover the narrative of loss that is the black experience; Billy Kahora reflects on the state of the ‘estate’ of his Nairobi childhood and finds its decay symptomatic of the malaise of a middle class that has lost its mind; and a transformative vision for the Lagos National Theatre is presented in four conversations and seven performative pamphlets.

Buy a print edition from the Chimurenga online shop. 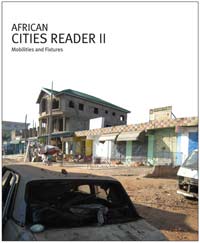 The second installment of the Reader is centered on the theme 'Mobilities and Fixtures'. In this issue Sean O'Toole interviews architect David Adjaye about African cityscapes, snapshot photography and failed utopias; Victor Lavalle uncovers the making of mercenaries in Uganda; Martin Kimani follows the African visa-seeker in the tragi-comedy that is the post 9/11 airport; Sherif El-Azma explores Cairo by foot; MADEYOULOOK and Santu Mofokeng imagine the didactic possibilities of trains; Manu Herbstein documents the 'car-doctors' of Accra; Chris Abani discovers the African city of Las Vegas; and Michael Watts examines oil cities.

The African Cities Reader is edited by Ntone Edjabe and Edgar Pieterse.

Read it online here or or get a copy of the print edition from the Chimurenga online shop. 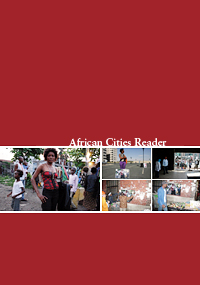 The African Cities Reader, an annual compendium of writing and art from multiple genres, forms of representation, and points of view, embodies and reflects the rich pluralism, cosmopolitanism and diversity of emergent urbanisms across Africa. The first installment of the Reader brings together contributors from across Africa and the Diaspora to challenge, examine and critique the prevailing depiction of urban life on the continent. The theme, Pan-African Practices, is explored from multiple vantage points to produce a fresh look at the trajectories and interiorities of the urban African experience.

In the launch issue Rustum Kozain muses over the cultural and alternative relations built, negotiations and dealings made as a resident of Cape Town (South Africa); Jean-Christophe Lanquetin's SAPE Project is captured in a pictorial narrative; Gabeba Baderoon and Karen Press poetically expound on the daily traversing of the personal and the (institutional) impersonal; James Yuma investigates the intersection between religion and national narrative in the Democratic Republic of the Congo whilst Valentine Cascarino asks how would a recontextualisation of Kinshasha in Johannesburg (South Africa) fare?; Annie Paul explores the practice of death and burial rituals in postcolonial Jamaica; and Vyjayanthi Rao, Filip de Boeck and Abdou Maliq Simone discuss Kinshasa's Invisible City and other African cities.